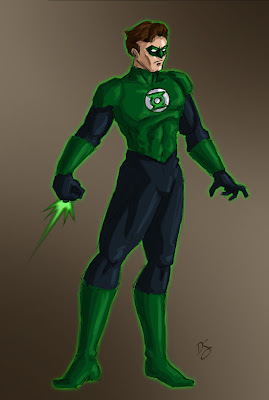 After watching the new Green Lantern animated movie, I wanted to take a stab at its take on the GL uniform. The costume details have had relatively small variations over the last fifty years, thanks in part to the near-flawless original design by Gil Kane.

The First Flight version has some elements of the current comics design, specifically the angled cutoff of green at the waist, but has its own elements that haven't been seen before. It's got more of an armored approach on the shoulders. Probably its most prominent departure is the absence of the classic white forearm gloves-- replaced by solid green arm bands that expose black gloves at the wrist.
Doodled by Super Edco