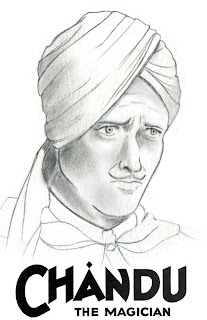 I know this isn't really horrorful like a truly halloweeny halloween picture should be but I really wanted to dress up like Chandu for Halloween and I couldn't find any of the right kinda gear for it so instead I did a quick portrait of my favorite serial star: Edmund Lowe as CHANDU!
Doodled by J

Haha nice! My only thing is that you should post more often... or else i'll throw something at you while you're not looking.

I really dig the oddly concerned look on his face.

Is he concerned or does he have to pee? Maybe he's concerned about peeing...

either way he's I can feel his pain. Well rendered.

He's concerned about how to properly pee into your Soup Du Jour... and how to do it magically.

He looks concerned about how he's "gonna get out of this one"... except he's realized that he's actually going to have to kill somebody this time.

You're right at the fact that he's concerned about how he's "gonna get out of this one"... except he's past the point of actually killing someone, chopping them up, and hiding them up his sleeves and realized that he only has two of them.

You should totally netflix Chandu. I think he looks concerned because he's trying to figure out which of his awesome powers to use but he has so many he can't decide.