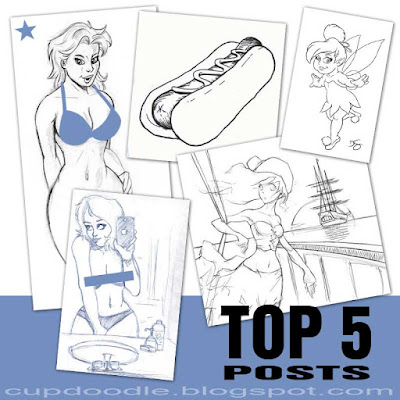 1. The Sunday Girlie (Edco, pre-edit)
No idea why this one kept the top spot since it's original post. Could have something to do with those magical key words... altho I've had other posts with similar (and much better skill!) that are nowhere near the 8000+ views this one has.

2. "Draw Me a Hot Dog!" (Edco)
In case you wonder, the lovely Vicki was the person who originally posed this question to me while attending Wizard World Austin. I've always found its popularity incredibly odd.

4. Baby Tinkerbell Tattoo (Edco)
Many of my tattoo posts are popular, but this one is also one of my personal faves.

5. Self Shot (Edco, pre edit)
This one has been steadily climbing the charts, starting from a massive spike after a user popped it into one of his memes on Reddit. It was eventually linked back to Cup Doodle (as True Gentlemen do).